I am using BricsCAD v21.1.06 on Mac Big Sur. I am planning to use Twinmotion to produce renderings from my BricsCAD models. I downloaded Twinmotion and watched the related demonstration video... 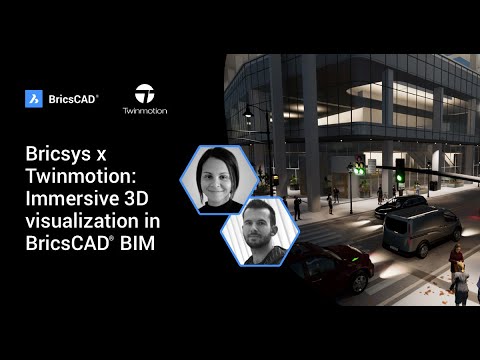 . I also visited this help page... https://help.bricsys.com/hc/en-us/articles/360017253260-Using-Twinmotion and tried to follow the steps to begin. Unfortunately, the option to export to a .udatasmith file does not appear. Is this available currently for BricsCAD on Mac OS? I tried exporting to a .fbx file and was able to open this in Twinmotion, but I'm curious if the .udatasmith format would work better. Using the .fbx file, I noticed all layer names are lost in Twinmotion and entities are lumped together in odd ways (floor slab and lights now on same layer in Twinmotion, etc.). All layers are just titled "Material1, Material2, etc., whereas the demo video indicates layer names should be retained using a .udatasmith tile type. Also, some of the entities within my BricsCAD model did not transfer to Twinmotion...for instance, some of my blocks show up in Twinmotion, whereas others of the same type and name on the same cad layer do not. I'm curious if the .fbx file format is affecting the usability in Twinmotion and wondering if anyone else has had more success in exporting to this program. Thanks!